Climbing mountains in the Alaskan pacific rainforest on Prince of Wales Island all the way down Arizona trekking across desert terrain, William Nelson weathered every element it took to move his token one step closer towards a record. The record more notably turning out to be records. Within five months, Will successfully harvested five different species of deer in North America to complete Safari Club International’s (SCI) North American Deer Grand Slam (NADGS) all with his preferred weapon of choice; a bow. Will’s journey started in late August of 2018 and continued through the end of hunting season across the continent. Initially thinking he was crazy for dreaming of completing a slam in a single season with his bow, he later realized it was possible with a lot of luck and persistence.

Will’s adventure and love for the hunt began far before 2003 when he set a goal to completing the Safari Club International’s (SCI) World Hunting Award Program. Just five animals short of completing this feat, Will is close to being on the short list of hunters whom own this title. The current list of five men he hopes to grow to six. Of these men, all have either used a firearm or combination of firearm and archery equipment to complete the achievement.

His hunting adventures have led him across the globe, reaching five of the six huntable continents, completing roughly 160 successful hunts of 108 unique species with the use of a bow. You can guess this is not cheap and doing the research you’ll find your assumption is right. All whom have obtained the prestigious award are millionaires, so to think just anyone can do this is kind of bizarre, right? Wrong. 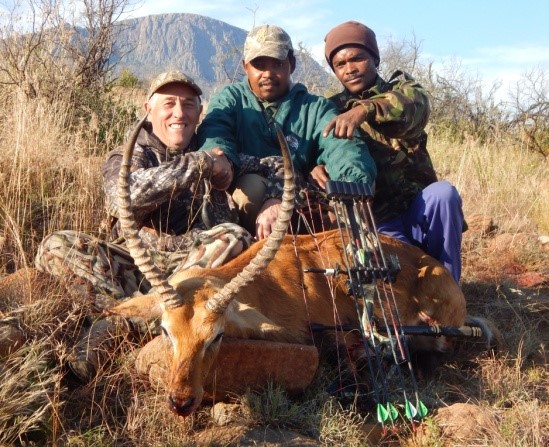 As Will describes, he’s like much of the population, working sunrise to sunset, involving himself in the community, an avid outdoorsman, Hunter’s Education Instructor and husband. Will’s involvement with the community brings global and cultural diversity most would not get without his elk camp for international guests wanting to experience hunting in Colorado. He’s already proven he can do what the other award winners have done and then some.

A brutal climb from sea level to 2,200 feet up a steep, tree-tossed Pacific rainforest while enduring daily Prince of Wales rain led Will on his first hunt in Alaska. Number one on his list with a group of six hunters was a Sitka black-tailed deer. Will can tell you, “the climb caused catastrophic injuries to two hunters in the first 30 minutes of hitting the beach,” to put in perspective how intense this hunt was.

Resting atop, what felt like the view from above the world, Will and his buddy Sam spotted a Sitka black- tailed deer sneaking by. His heart started racing when he then glassed a buck bedded only a couple hundred yards away. Stalking the deer to within 40 yards, Will arrowed the largest buck he could see from the group with his PSE Evolve 28.

Will soon found himself trekking another mountain in search of the next species on the list; a Colorado Rocky Mountain mule deer. 11,500 feet above sea level, Will was searching for berry bushes for a potential bear hunting site, when he crossed paths with a hitlist buck only 35 yards above him. What was a half-hearted hunt turned into harvesting one an incredible buck on his “home” turf. As a solo mountain hunter, Will couldn’t believe the buck ended up laying a mere 300 yards from one of the few roads accessible with his truck out. He described it as a “God send!” and I don’t blame him. Packing out a deer by yourself at that elevation can be painstaking.

Hunting outside Spearfish, South Dakota and near an archery only state wildlife area, he found himself on the third of five hunts. This time for a Black Hills white-tailed deer. The area wasn’t always noted for many large bucks, however, Will managed to arrow ten-pointer. As soon as it turned broadside, Will’s PSE Evolve 28 fired off a Carbon Force arrow successfully piercing the ten-pointer.

Three down; two to go! Decatur Island is a private three-square mile island in the San Juan Islands off the state of Washington. It’s home to roughly three hundred Columbia black-tailed deer. Talking to the locals, you’ll hear that the deer are overpopulating the San Juan Islands. Will had conservation in mind and made the decision to harvest a mature doe. He noted how useful it was to have his short axel-to- axel PSE Evolve 28 among the abundant wild rose bushes that made for his cover. A longer bow would have made this location difficult if not impossible to hunt. At 24 yards, Will hit his mark and successfully harvested his Columbia black-tailed deer tag.

Will was excited for his final hunt in Arizona for a Coues deer. The last and arguably most elusive of the species, Coues deer don’t normally comingle with elk. In Will’s case, they did. His hunt was filled with excitement as he watched a 5×5 bull much of the morning before a Coues doe and buck pursued in the right direction. Hot on the tail of the doe in front, Will’s window to get a shot at the buck chasing was small. As he seen the arrow penetrate the side of the buck, Will’s emotions skyrocketed into pure bliss. He just set a record!

By the end of January 2019, Will had harvested four bucks and one doe. Three of the four bucks had scored Pope and Young while the fourth just barely missed out. Will’s attitude towards his record setting capabilities is humble and respectable. He may have a basement filled with trophies from across the globe, however, he sees the real treasure in the money he was able to give back to conservation efforts that support wildlife and world we live in. Hunting and conservation go together being a large reason for Will’s continued support for organizations such as Safari Club International. He appreciates being a part of an organization that puts their money towards the greater good of our world’s wildlife and ecosystems.

Will’s experience and endurance to whole-heartedly pursue SCI’s North American Deer Grand Slam raised the bar of expectation to a new level for hunters across the world. He’s already had thoughts cross his mind of how the next archer would accomplish such a feat. Would they dare to do it in a single season, let alone be successful on all the hunts? He sure hopes to see the day the next archer does it. As Will says, “It’s one thing to say catch me! Anyone can do that. It takes fortitude and perseverance to say there’s the bar, now raise it!”