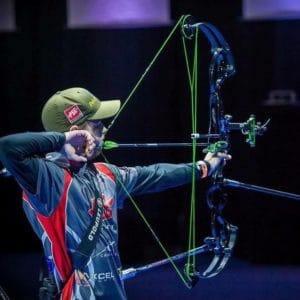 With his win this weekend at the 2017 Nimes Archery Indoor Tournament, Team PSE shooter Stephan Hansen has further cemented his standing as one the best competition archers in the world. Finishing up his final round by shooting three bullseyes in a row with his PSE Xpression compound bow, Hansen defeated Slovenia’s Dejan Sitar 148 to 145.

“Stephan is an amazing shooter, there’s no other way to put it,” stated Blake Shelby, VP of Sales and Marketing for PSE. “We knew years ago that Stephan was going to be the future of International competition archery, and every time he shoots at a tournament he proves us right.”

This win at the Nimes tournament comes only a month after Hansen took gold at World Cup 1 for the second year in a row. He also won individual and team gold at the European Archery championships last year.