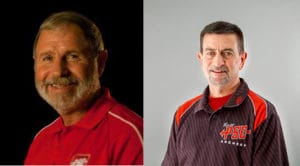 TUCSON, AZ (May 23, 2016) — PSE Archery today announced the retirement of Regional Sales Manager Jim Landrum. Landrum is a 30 year veteran of the PSE sales team, and before that spent 15 years promoting the brand in the Southeast.

“After 45 years of being involved with PSE and the sport of archery, I’m going to miss the industry, my customers, and most of all the friendships I’ve built over the years,” stated Landrum. “I’ve never owned a bow that wasn’t a PSE, and working for them will always be the experience of a lifetime.”

After returning home from the Vietnam War after High School, Landrum immediately began working as a football coach and member of PSE’s pro staff, which eventually led to his position as Regional Sales Manager. According to Landrum, joining PSE was the best decision of his life, but he’s looking forward to having the freedom retirement offers.

While PSE management wishes Landrum the best, they also know he’s going to be difficult to replace.

“Having an employee as dedicated, loyal, and just plain good at his job as Jim Landrum is a rare thing,” said Pete Shepley, founder of PSE. “Jim is not only an employee, but also a close friend and a member of our family. We are very proud of all the work he’s done here at PSE and he will be greatly missed”

These sentiments were also echoed by PSE President Jon Shepley, and VP of Sales and Marketing, Blake Shelby, who both referred to Landrum as “irreplaceable.”

Luckily for PSE, they’re confident they have the best man for the job in David Alligood, a 30 year bowhunter and PSE shooter who has spent the last few years being mentored by Landrum as a member of his Pro Staff and who according to Landrum is “energetic, self-motivated, and great with customers.”
Landrum will stay on to train Alligood until his retirement in July. As for Alligood he’s excited to begin what he considers to be dream come true.

“I could not ask for a better mentor and friend than Jim Landrum,” said Alligood. “I’ll have some big shoes to fill and relationships to build, but I’m looking forward to it. Working for PSE has always been a dream of mine, and my family and I are so blessed to see that dream fulfilled.”